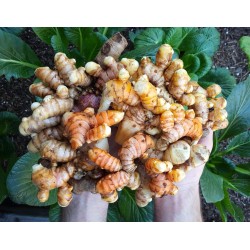 Turmeric (Curcuma longa), the bright yellow of the spice rainbow, is a powerful medicine that has long been used in the Chinese and Indian systems of medicine as an anti-inflammatory agent to treat a wide variety of conditions, including flatulence, jaundice, menstrual difficulties, bloody urine, haemorrhage, toothache, bruises, chest pain, and colic. The spice is one of the most researched natural compounds in modern time. Some studies has shown the most potent part of Turmeric, Curcumin, to be as potent as NSAID – drugs, when it comes to reducing pain and inflammation. Other study has shown a marked effect on cancer due to its strong antioxidant capacity. As a spice it has many positive effects on our immune system, so we are doing ourselves a huge favour by including some more of its goldilicousness in our lives.
Be aware, it does tend to stain everything!